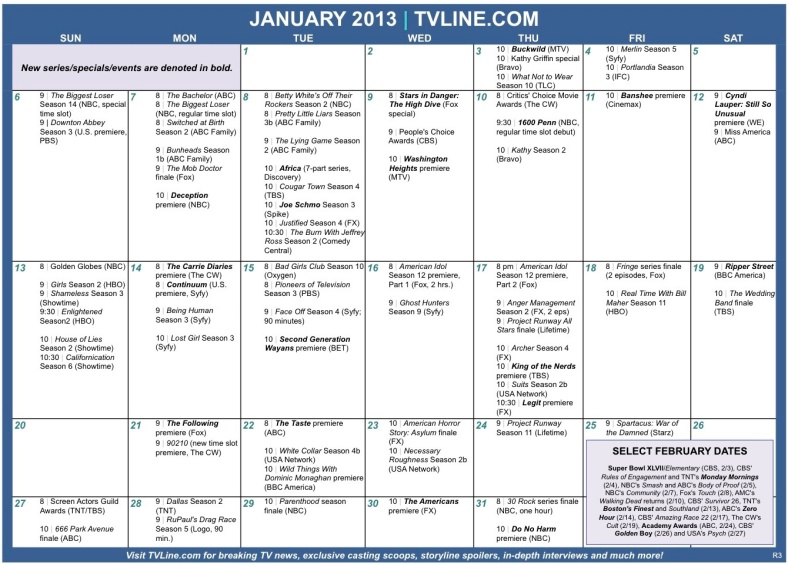 Your New Year’s resolution for 2013 is to hereby… continue watching a lotta TV.

To that end, and by popular demand, TVLine presents this handy calendar of more than 70 tune-in dates. You’ll find January′s biggest season premieres – including fresh batches of American Idol, Justified, Cougar Town and White Collar – as well as the arrival of newbies such as Fox’s The Following and The CW’s Carrie Diaries (both of which, by the way, are good stuff).

Midseason series premieres are denoted in BOLD, and we’ve also included a few finale dates — including the very final episodes of Fringe and 30 Rock. (Unlike last year, we have not denoted when each and every current series returns from the holiday hiatus. So, be strong, everyone; your show will be back sooner rather than later. Er, unless you’re talking about Revolution or Grimm.)

You can read more about the broadcast networks’ midseason schedules at these links: ABC, CBS, Fox, NBC, The CW.

Preemptive P.S. My calendar-making skills are not infallible, so if you spot something that is (theoretically) missing, drop a note in Comments and I will (possibly) make updates as warranted.

P.S. No. 2: The tinted box in the lower right corner offers a peek at some select February 2013 dates.