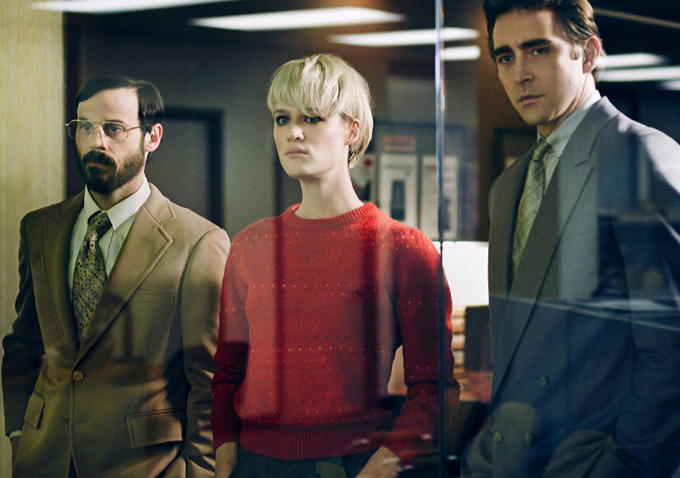 Ok, there are probably a lot of good shows on TV that you’re not watching and that deserve attention, but for me, personally, if I have to vouch for one recent favorite, it’s AMC’s ‘80s-set computer company drama “Halt And Catch Fire.” I accept that my taste is not really in line with most critics when it comes to the realms of television (and possibly even fellow Playlisters, too). I don’t think “Homeland” betrayed itself in the third season like many have suggested (I’d argue “House Of Cards” did that with it’s straining-the-suspension-of-disbelief, shark-jumping writing), I like the character-driven “Boardwalk Empire” a lot (a show that many critics seem to have abandoned despite one of the bests casts on TV) and I feel like “Breaking Bad” was always a tad overrated (and if this is where I lose you, fair enough). I never made it past the first season of “Mad Men” (though I suppose I need to give it a second chance), recent hit shows like “Orange Is The New Black” (a little too broad and sitcom-y in tone for my taste) have left me cold and I haven’t yet been hooked by “The Leftovers.” Eventually I do need to carve out some time for “The Knick” (which I am greatly looking forward to).

Anyhow, ratings for “Halt And Catch Fire” haven’t been exceptional – 1.3 million viewers over its first ten episodes, and a modest 0.5 rating among adults under 50 according to Vulture – but AMC has shown their long-term patience and investment in the show and renewed it for a second season. The war for corporate hegemony in the world of the 1980s computer industry isn’t the sexiest topic for a show, but it works because it’s actually about the triangulated dynamics of three very disparate people working at a fictional upstart company trying to break in.

Set roughly one year after IBM all but cornered the market with the release of its first major PC product, “Halt And Catch Fire”—its title a reference to a fictional instruction code that causes a computer to cease operating, a bit like control, alt, delete, but it also mirrors the trio’s self-destructive qualities—centers on maverick, volatile former IBM executive, Joe MacMillan (Lee Pace). With a passionate, fanatical (and mostly illegal) plan to reverse engineer IBM’s flagship product, he forces his current company, Cardiff Electric, into the personal home computer race. He becomes the sworn enemy of his boss (Toby Huss), but in so deep after surviving a brush with IBM’s team of corporate lawyers, they are forced to keep MacMillan on a leash at least until their own product can hit stores.

Caught in the crossfire of it all is Gordon Clark (Scoot McNairy), a brilliant, but stymied engineer. His dreams of producing his own revolutionary product have been placed on the back burner because of manic episodes that put him in serious dutch with his wife Donna (Kerry Bishé). McMillan enlists Clark and Cameron Howe (Mackenzie Davis) — a young, hot-blooded computer hacker, punk-rocker prodigy — to join as the leads of his rogue PC project. Where “Halt And Catch Fire” gets really good is within the venn diagram where the collective needs, ideations and desires of these three (and sometimes four) main characters intersect and conflict. Perhaps what “Halt And  Catch Fire” conveys best is the thrilling spirit of innovation, of being on the ground floor of something new and potentially special, and the intoxicating nature of taking big, possibly fatal risks to create something that could be groundbreaking. So deeply invested in this world are its characters that the stakes for everything become extremely high and personal.

While all three characters are vastly different, they find common ground in their desire to change the game. They’re not only talented engineers, coders and in McMillan’s case salesmen, they’re thinkers, trailblazers and visionaries. Joe McMillan could be the next Steve Jobs, but it really matters little if you know anything about that future because the show – created by Christopher Cantwell and Christopher C. Rogers – passionately sells it well.

I could care less about the world of 1980s computing (though “Halt And Catch Fire” certainly makes it an intriguing milieu), but that’s not really the point. The draw for me, beyond what I’ve already described, is the cast. All four of these actors are doing terrific work on the show. The unpredictable and erratic McMillan is easily the best character and most engaging role of Lee Pace’s career thus far (I’m sure the actor would agree), and the always reliable Scott McNairy is exceptional as the obsessive engineer and father trying to negotiate his marriage and aspirations – all the while having to try to keep his fixations from turning into nightmares.

Mackenzie Davis broke out in a big way at Sundance 2013 going toe to toe with fantastic actors like Guy Pearce, Felicity Jones and Amy Ryan in “Breathe In,” and scored most of the acclaim too. But she’s never really found a good meaty role since until the eccentric and rebellious Cameron Howe; who is one of the most interesting female characters on TV this year. Likewise, Kerry Bishé, something of a token mom character on the show intially, has made the most of her surprise turn as the fourth lead and ace up the sleeve of the Cardiff team (an accomplished computer engineer and brilliant mind, she’s taken a working stiff jobs to support the family, but still yearns to get her hands dirty).

And so the actors are deeply compelling and I’m all in for more. While the season ended with an implosion that alienated all four players – season two could be a reboot of sorts – I’m fascinated to see where it all goes. “Halt And Catch Fire” isn’t perfect. If I had to grade the show overall, I’d probably give it a B or a B+, but it’s that type of B student you really care for and root for their success.